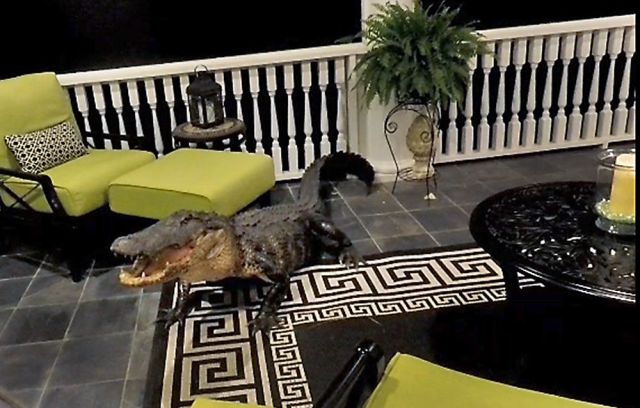 Humans were not the only animals displaced by Hurricane Harvey’s epic flooding in south Texas and Louisiana. Now, as the waters recede, returning residents are finding neighbors from the animal kingdom in unexpected places.

On Friday, Brian Foster returned to his Lake Houston, Texas, home on Friday to find a 9ft-alligator in the living room. A Harris County Precinct 4 Constable tweeted a photo of the reptile, which was shortly afterwards collected by wildlife control officers.

‘Gators are refugees from the hurricane themselves. They’re disheveled and upset
According to Chris Stephens, aka Gator Chris, a “nuisance control hunter” with the nonprofit, Houston-based Gator Squad, reptiles have been suffering just as people have. Alligators, which cannot withstand the fast moving flood waters for long periods, were forced to find higher ground where people were also seeking refuge.

“Their ponds and creeks are overwhelmed with water, so they’re finding themselves in unfamiliar neighborhoods surrounded by people and they don’t have much of a choice,” Stephens told the Guardian.

“So it’s been common for folks coming home to find ‘gators. They’re not overly aggressive. They’re just dislodged, and refugees from the hurricane themselves. They’re disheveled and upset.”