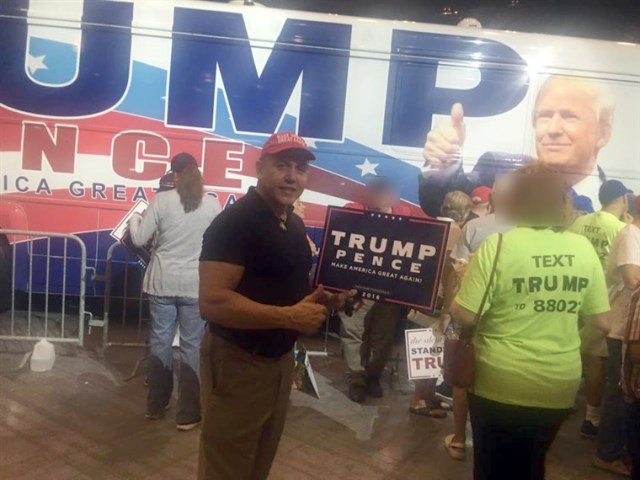 PRESIDENT DONALD TRUMP is a threat to national security.

He preaches hate. He incites violence. He inspires attacks.

We knew this before Friday’s arrest of Cesar Sayoc, who has been charged with a number of crimes in connection with more than a dozen pipe bombs sent to the nation’s most prominent Democrats, among others. As my colleague Trevor Aaronson has written, Sayoc is “a fervent Trump supporter.” Check out his van; his posts on social media; the testimony of his colleagues.

I have no doubt that Trump helped radicalize Sayoc. Yet Trump apologists are keen to distance their hero from this particular villain. So too, of course, is the president himself. “We have seen an effort by the media in recent hours to use the sinister actions of one individual to score political points against me,” Trump said at a campaign rally on Friday evening.

“One individual”? Who is he kidding? Sayoc may be the latest individual to have combined his love for Trump with a love for violence against Trump’s opponents, but he is far from the first to do so. In fact, there have been a number of violent threats, attacks and killings linked to Trump supporters in recent years — few of which have dominated the headlines in the same way as Sayoc’s alleged attempt to assassinate top Democrats, including two former U.S. presidents.

Update: October 27, 2018, 4:30 p.m. EDT
Minutes after this story was published, news reports confirmed that multiple people at a synagogue in Pittsburgh had been killed by a gunman. The gunman taken into custody has been linked to anti-Jewish and anti-immigrant posts on social media. At least 11 people were killed and six injured at the Tree of Life synagogue.