STARLINK SATELLITES PHOTOBOMB A METEOR SHOWER: Yes, there was an outburst of alpha Monocerotid meteors on Nov. 22nd. As predicted by forecasters Esko Lyytinen and Peter Jenniskens (NASA/Ames), Earth grazed a filament of comet dust, prompting a flurry of meteors to emerge from the constellation Monoceros (the Unicorn). In La Palma on the Canary islands, a Global Meteor Network camera captured the display–and something more. Starlink photobombed the meteor shower: 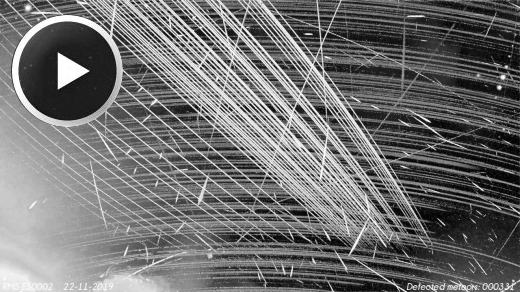 “It was a real eye-opener,” remarked Bill Cooke, the lead of NASA’s Meteoroid Environment Office, when he saw the video. “This kind of thing could force us to change how we write software to auto-detect meteors.”

Starlink is a venture by SpaceX. The idea is to launch 12,000 or more satellites into Earth orbit, surrounding our planet and providing global internet coverage even to people in remote areas. The first batch of 60 Starlink satellites launched in May 2019 surprised astronomers and prompted the International Astronomical Union to issue a statement of concern. Filling the sky with artificial stars might not be good for astronomy, they suggested.