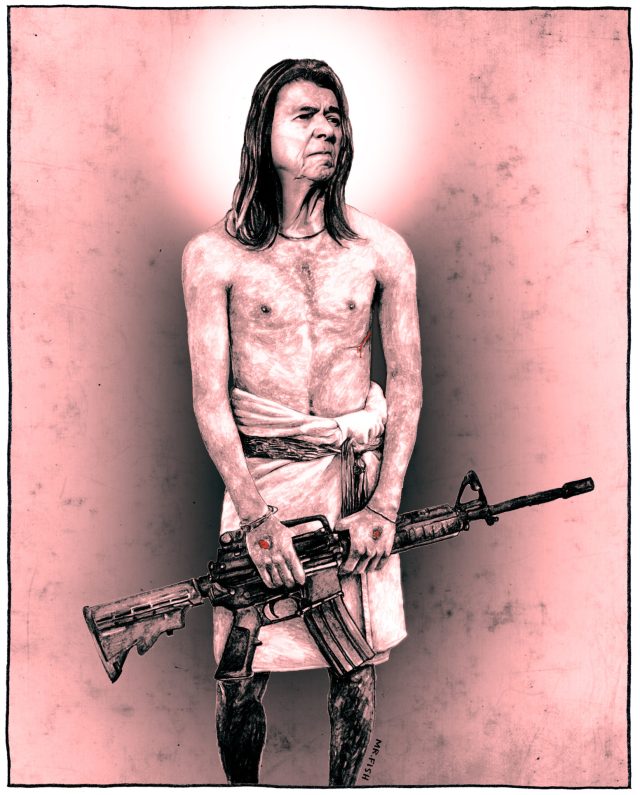 The greatest moral failing of the liberal Christian church was its refusal, justified in the name of tolerance and dialogue, to denounce the followers of the Christian right as heretics. By tolerating the intolerant it ceded religious legitimacy to an array of con artists, charlatans and demagogues and their cultish supporters. It stood by as the core Gospel message—concern for the poor and the oppressed—was perverted into a magical world where God and Jesus showered believers with material wealth and power. The white race, especially in the United States, became God’s chosen agent. Imperialism and war became divine instruments for purging the world of infidels and barbarians, evil itself. Capitalism, because God blessed the righteous with wealth and power and condemned the immoral to poverty and suffering, became shorn of its inherent cruelty and exploitation. The iconography and symbols of American nationalism became intertwined with the iconography and symbols of the Christian faith. The mega-pastors, narcissists who rule despotic, cult-like fiefdoms, make millions of dollars by using this heretical belief system to prey on the mounting despair and desperation of their congregations, victims of neoliberalism and deindustrialization. These believers find in Donald Trump a reflection of themselves, a champion of the unfettered greed, cult of masculinity, lust for violence, white supremacy, bigotry, American chauvinism, religious intolerance, anger, racism and conspiracy theories that define the central beliefs of the Christian right. When I wrote “American Fascists: The Christian Right and the War on America” I was deadly serious about the term “fascists.”