A team led by Miguel Montargès of KU Leuven in Belgium took the picture in Dec. 2019, shortly after the star began its unprecedented dimming. They were able to compare it to a “normal” picture of Betelgeuse taken 11 months earlier. The change in shape is striking.

What’s going on? The researchers aren’t sure why Betelgeuse looks so different, but they suspect the involvement of dust. Red supergiants like Betelgeuse create and eject vast amounts of dusty material, losing mass even before they explode as supernovas. The lopsided shape and dimming of Betelgeuse might be explained if a cloud of dust is partially blocking its disk. Indeed, VLT infrared observations of Betelgeuse at the same time reveal lots of dust around the star.: 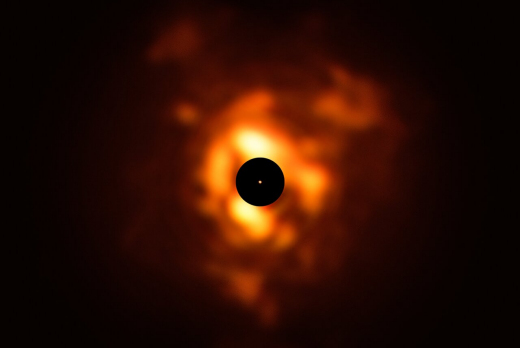 Mystery solved? Not necessarily. “Our knowledge of red supergiants remains incomplete, and this is still a work in progress, so a surprise can still happen,” notes Montargès. Other possibilities include magnetic activity on Betelgeuse’s surface (such as a giant starspot) and, of course, the early stages of a supernova explosion.

The Very Large Telescope with its adaptive optics instruments is one of the few facilities in the world capable of imaging the surface of Betelgeuse, located more than 600 light years away. More images from the Atacama desert may yet reveal what’s happening–if Betelgeuse doesn’t tell us first!