THE NITROGEN FRINGE: For weeks, aurora tour guide Rayann Elzein of Utsjoki, Finland has dreaded the end of aurora season. If this was it, it was a doozy. “I have almost no words to describe what I saw tonight!” he says. “There was a crazy, fast and bright aurora show, with many pink fringes, almost nonstop for 45 minutes.” 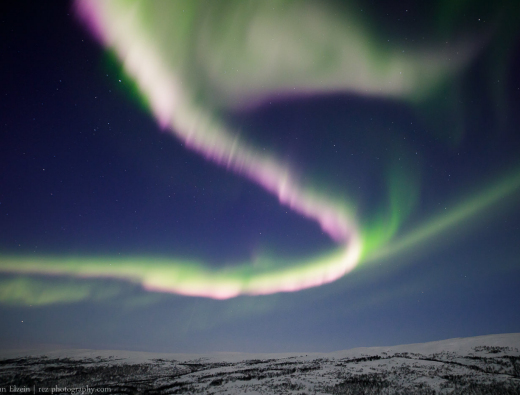 This is a “nitrogen fringe.” Most auroras are green–the color of oxygen atoms struck by energetic particles from space between 100 km and 300 km above Earth’s surface. Pink appears when energetic particles descend lower than usual, striking nitrogen molecules at the 100 km level and below.

“I hiked up a fell here in Utsjoki in the Finnish Lapland, and while standing on the summit, I felt as if I could almost touch the aurora. This was a very special moment for me. Wow, what a night, almost at the very end of our aurora season!”